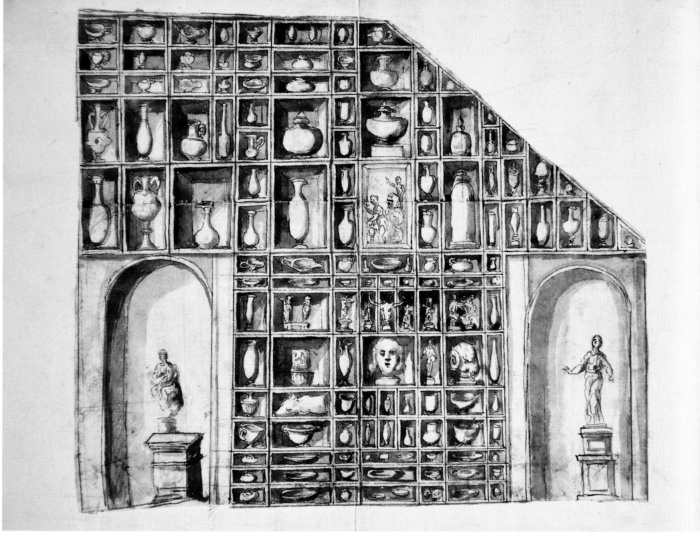 Theme of the 2014 fall school is “Palaces and collections: Modelling the coevolution of architectural spaces and artworks display (15th-19th centuries).”

This year, the students will work on a theme at the intersection of history of art and architecture: modelling the coevolution of architectural spaces in relation with artworks display, circulation and gathering. Venetian Palaces provide a unique testimony on how European elites – nobles, politics, merchants, humanists – progressively invented new ways of living surrounded by magnificent artworks. In Venice, display of artworks in palaces, was associated with an etiquette and hierarchy that applied to every person, space and thing. The progressive establishment of this symbolic spatial organization and its evolution from private collections to public displays is well documented, both in archival sources (notarial records, inventories, …) and dedicated monographs on this subject. The goal of this doctoral school is to investigate new ways of visualizing this evolution integrating the information about the constitution of artwork collections with data documenting the architectural evolution and urban changes.

The doctoral school will focus on the evolution of the circulation and display of artwork from private collections to public museums, covering a time period ranging broadly from the 15th to the 19th century. In the literary sources of the Renaissance, the private collections in Venice were a kind of myth. Wealthy collectors like the notary Oliviero Forzetta, or Giovanni Grimani and Gabriele Vendramin accumulated different objects of art, curiosity and mirabilia. Generally speaking, collecting became particularly important in Venice at the beginning of 16th century and collections of the Venetian palaces included different media categories, moveable and immoveable: frescoes, cabinet pictures, tapestries, sculptures and architectures. These collections were initially displayed only in private spaces.
However, through the centuries, collecting became increasingly a public phenomenon as demonstrated by new forms of organization and presentation of the collections. The objects left the private studio and began to occupy all spaces of the buildings, often open to an educated and informed public. This was the initial prototype of the museum. The palazzo of the collector Andrea Odoni was for instance described by Vasari as “albergo o ridotto dei virtuosi” [boarding house and foyer for the Virtuous].

Documents attesting of this evolution from private to public collections are numerous. For instance, in the inventory of Gabriele Vendramin (in the Archivio di Stato di Venezia) the architectural scenography to display ancient sculptures and the presence of specific furnishings for curiosity, bronzes, porcelains, inscriptions and bas-reliefs are well documented. The evolution of Grimani collection and palace gives another well-described example of this evolution for the XVIth century.  Collections were originally located in the private rooms of the house and the rarities were accessible only to the owner or a few close friends but, over time, the presence of objects of art in ‘public’ spaces, such as the courtyard, represents undoubtedly an evolution of the display criteria for collecting.

The goal of this doctoral school is realize a possible reconstruction of the architectural changes of well-chosen palaces in Venice, simulating the evolution of the display of collection through time. Understanding the connection between architectural spaces and collection displays will not only enable to visualize in a completely novel manner this evolution from private space to public museums but should also permit to shed new light of the evolution of the real motivations of the collectors.
To accomplish, in one week, students will work in groups using digital tools such as Google Sketch up to translate historical and modern maps, prints, engravings and paintings into 3D models. In addition to the exterior reconstruction of the buildings, students will use inventories and various iconographic sources to recreate interior spaces with the collections. All monuments will be mapped onto present-day Venice.

Gilian Crampton Smith: The role of the interactive design

Bernard Aikema: From private collections of art to public spaces

Shelley Mannion:  How to communicate for a large public: the role of the devices for the museums