First we analysed the information structure of the Catastici and tried to draw the street path of the officer that wrote the register in 1740. For this work we went directly on site in the Rialto district in order to find the actual precise locations of the parcels written in the Catastici. A in-depth study of the area and its toponymy revealed, however, a not logical sequence of the places named in our source: thanks to this clue we understood that maybe the Archive documents were not the result of a door to door survey but a transcription of this census written later, in another moment and place.

After this trip in the Rialto we redraw the path in the QGIS software (see image below). Tracing the magistrate path wasn’t an easy task since his behaviour is not aways regular, making us believe that Catastici could be an aggregation of different survays done by, possibly, different persons in different times. Moreover, the complex structure of venician buildings makes impossible to establish the exact parcel to which the magistrate is referring in absence of other informations (e.g. Sommarione of 1808). 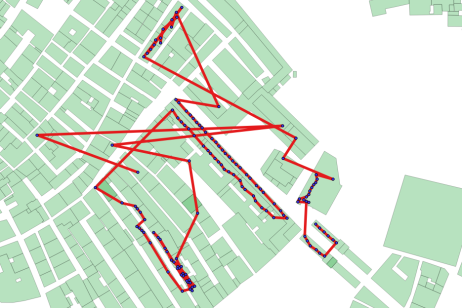 The next step was to find the homologous points between the land registry of 1740 and Sommarione of 1808. We try to find matches betweens the names of the owners fo the Sommarione of 1808 in the 1740 cadaster, then we pin in the QGIS software the precise location of each maps. For each parcel we define a level of confidence in order to track the accuracy of our data, you can discover this classification on the map below :

INTERPRETING THE DATA. AN ECONOMIC (AND HISTORICAL) PERSPECTIVE

On this map we can see the different types of shops of the Rialto based on the 1740’s Catastici.

The mapping of the principal street of the Rialto market, ruga degli orefici, have revealed the presence of thirty-two workshops of goldsmiths  (oresi and perlieri). It could be related, almost certainly, to the expenditure behaviors of Venetian noblemen and bureaucrats. According to Professor Andrea Zannini, in fact, during the eighteenth century this social class preserved an high standard of living, despite its loss of economic strength on international markets and the progressive consumption of its riches. However, the many workshops of tailors and couturiers (sartori) display the survival of a lively, traditional manufacture of clothes and other wool and silk products, not entirely displaced in the mainland. The sources testifies, moreover, the existence of a couple of botteghe for hairdressers (parrucchiere) and barbers (barbieri). There, customers could buy wigs in the latest fashion and, according to several studies, information and advices. Expensive treatises and luxury volumes, instead, could be purchased in the only bookshop of the area, placed at the corner of ruga degli orefici and ruga vecchia di san Giovanni.

Incomes show generally a positive economic trend. Craftsmen could pay high rents for displaying their jewels and their cloths in one of the busiest roads of the capital, where tourists and citizens made their high-priced sales. In those years, several enlightened economists, such as Antonio Genovesi and Bernard de Mandeville, praised luxury as a stimulus for production and consumerism. But rents, nevertheless, allowed the upper, aristocratic classes to persist in their parasitism and their conservatism, relegating the city to a secondary, regional role in international markets. Losing its competitiveness, the Serenissima Repubblica was near to its collapse.